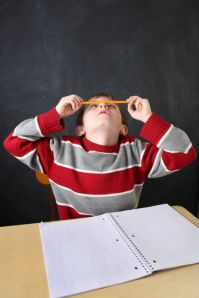 Attention Deficit Hyperactivity Disorder, or ADHD, as it is commonly known, is real problem in elementary school, middle school, and high school aged children. The CDC reports that 3-7% of school aged children have been diagnosed with a form of ADHD.   This disorder can cause children to struggle in school because they can not control their impulses, causing disruptive behavior.  They also find it hard to concentrate, plan ahead or follow through with simple tasks.  ADHD is caused by a chemical imbalance in the brain, causing children to have difficulty with their schoolwork, and also causing them to have difficulty socially; they often find it hard to socialize with their peers.  There are many ways to treat ADHD, including medications and behavior therapy.  Many people find there to be a stigma to taking ADHD medications, and it should always be kept confidential, with medications locked up and out of sight to limit embarrassment to the child who is taking the medications.

It can be hard to find the right medication to treat each child’s ADHD.  Stimulants are the most common way to treat ADHD.  There are two kinds of stimulants, a long acting stimulant and an immediate acting/short term stimulant that only lasts a few hours.  Children taking the long acting stimulants can just take them one time a day, and they last between 8-12 hours.  Currently there are a lot of these drugs on the market, Ritalin and Adderall, which are two of the most common ADHD stimulant medications both make a long acting medication.  Concerta is another drug that can be taken once a day. This can protect the privacy of the children as many children and teens do not want to take a lunch time dose of medications at school, as they are sometimes embarrassed that they have to take these medications.  The longer acting stimulants don’t work for every child, and some will have to take the short term medications which do require a dose to be taken at school.  These medications are quick and immediate acting, so when the morning dose has worn off, the lunchtime dose needs to be taken so the child can continue to benefit from the effects of the medication.

Thank you for your message, we will be in touch very shortly.

Sorry, there has been a problem and your message was not sent.

Please enter your contact details and a short message below and we will try to answer your query as soon as possible.